Like the bhajis mentioned in this blog some time ago these little parcels make a deliciously sweet/savoury and surprisingly light snack. Slightly more substantial than a canape, they can be stuffed with a variety of fillings such as mushroom, feta cheese and spinach. In this case however, we strongly recommend using sweet potatoes that much underrated root. They are great value, easy to prepare but more importantly they are full of enzymes and extremely healthy. Originating in Central and South America sweet potatoes have been domestically cultivated for at least 5,000 years and have spread throughout the world. They are an amazing source of Vitamin A, C, B6 and iron and calcium and their cultivation is heavily promoted in Africa and other developing areas where a nutritional diet is crucial. All this sounds rather worthy but don't let this put you off. Although not widely grown in Europe they are becoming more and more popular in our cuisine and work particularly well in this dish. Their sweetness being deliciously counterpointed by the salt and chilli. 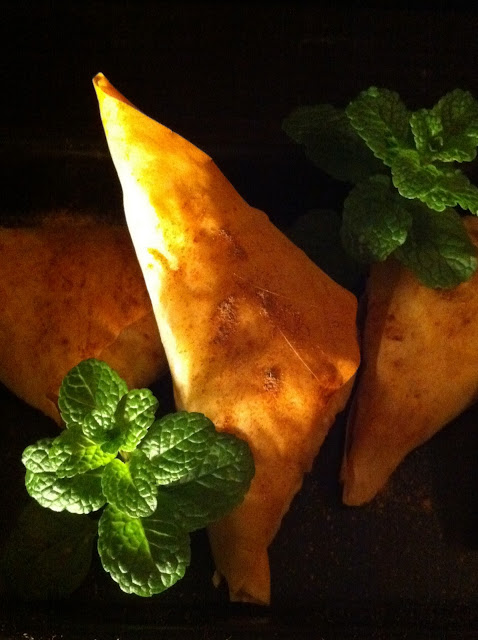 Method
Soften the un-peeled sweet potatoes. (An easy way to do this is to pierce the potatoes skins and put them in a supermarket shopping bag in the microwave for about 5 minutes or until soft). In the meantime fry the onion in a little olive oil with the chilli flakes. When the potatoes are soft enough scrape out the potato flesh and discard the skins and allow to cool before adding to the onions. Prepare the pastry by dividing the filo sheets into 4 equal strips lengthwise. Brush each strip with butter. Place a table spoon of the mixture at one end and then fold up in a triangle from side to side using all the pastry strip so the filling is completely sealed in. Brush the parcels with butter and place on a baking tray in the oven at 200 C for about 20 minutes or until they have turned golden. Sprinkle with cinnamon powder and serve hot or cold.

Email ThisBlogThis!Share to TwitterShare to FacebookShare to Pinterest
Labels: recipes