Luckily for us the Evason Spa Retreat on Phuket is situated on a steep hillside. It was around 10.00 am on boxing day and yet another beautiful day in paradise. We had spent the previous day, Christmas day exploring the Phang Nga Bay National Park in small canoes wandering in and out of flooded lagoons and caves so low we could only go in at low tide and even then we had to lie flat in the boat as the boatman steered us along with his feet on the roof. Its where the James Bond movie "The Man with the Golden Gun" was filmed and is unforgettable scenery! This morning we had just packed our bags and booked a taxi, ready for our immanent departure to the airport for the short flight across the Southern Thailand peninsula to Kho Samui so just time for a late hotel breakfast served in the idillic poolside restaurant down the hill right beside the sea.


Breakfast was an elaborate affair with a dazzling choice of Western and Asian dishes on offer at the buffet but bacon, eggs and sausages somehow seemed slightly incongruous with the setting, the warm breeze and the bright sunshine so we usually plumbed for the Asian choice of Pad Thai. Ominously the Thai chefs who we used to chat to every morning were not their usual cheery selves and even remarking on the odd grey colour of the sea and warning against swimming today. As we sat there tucking into the noodles our experience of the 2004 Indian Ocean tsunami suddenly and without warning began to unfold. A dramatic drop in sea level was closely followed by a destructive wave bubbling unnaturally and sweeping perpendicularly in front of us destroying a wooden jetty, capsizing and smashing mored boats and throwing several people into the sea. The wave continued on to flood the infinity swimming pool depositing a shoal of large bewildered and dazed fish in it. Pandamonium broke out as attempts were made to rescue the people in the water whilst the Tannoy crackled out hysterical warnings for us to leave the restaurant area immediately and head back up the hill to the relative safety of the main hotel buildings. So began several dramatic days as the full tragedy and horror of what had happened slowly began to dawn....

The Pad Thai we were eating for breakfast on that memorable morning is now one of Thailand's national dishes available on every street corner but this was not always the case. Originally introduced from Vietnam rice noodles have been eaten in Thailand for centuries but it was not until a government initiative in the 30's and 40's to ween the population off its high rice dependency and encourage the production of rice noodles so there would be more rice available for international export that they became really popular. It is a stir fried dish with rice noodles, garlic, chilli and tamarind and any combination of bean sprouts, prawns, chicken and tofu, garnished with crushed peanuts, spring onion, coriander and lime. 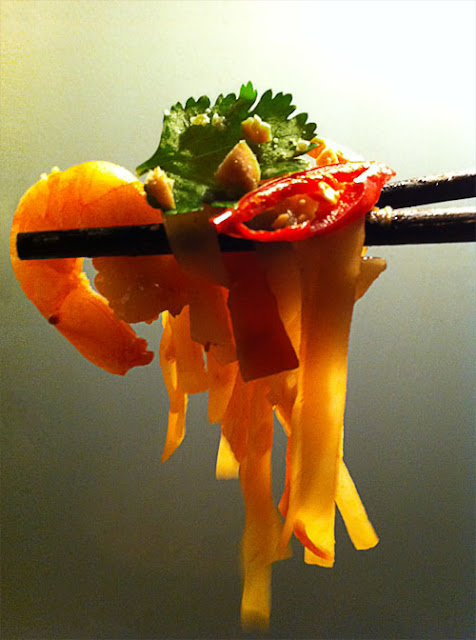 
Method:
Heat 3 tbsps oil in a wok until quite hot. Meanwhile prepare the rice noodles as per the pack instructions. (Normally soak for 10 - 15 minutes in warm water - save a little of the water in case noodles become too dry). Mix lime juice, tamarind paste, palm sugar and fish sauce in a bowl. Fry the garlic and chilli in the wok and cook for 2 minutes but do not allow to burn. Add carrots and fry till slightly soft then add the liquid mixture and stir for about a minute, reduce slightly. Add beaten egg and scramble until almost cooked. Throw in prawns, bean sprouts, spring onion and drained noodles and toss well. Check for seasoning if more salt required sprinkle fish sauce over. Turn out onto serving dish and garnish with coriander, lime wedges and peanuts.