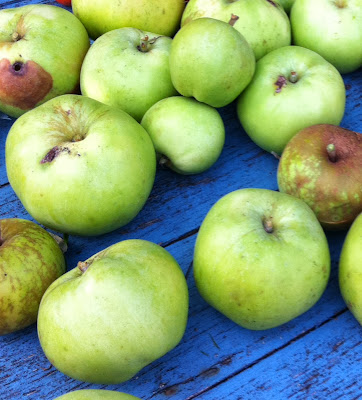 Similar to Kent in South-East England Normandy just across "Le Manche" in France is famous for its apple orchards which are mentioned as far back as Charlemagne in the eighth  century. It doesn't take a PhD to work out that in French cuisine the term "Normande" is generally used to denote a dish with apples! But perhaps the best known products from this fruit crop are not a food but drinks - apple cider and the liqueur distilled from it.. Calvados. Both of these are used to great effect in this recipe.

Pork and apple is a classic match made in heaven and this unctuous creamy sauce with apple is no different. Here we serve it with lumache and sugar snaps. If you wish you can substitute the pork with chicken or veal escallop or even a meaty white fish which will work very well. 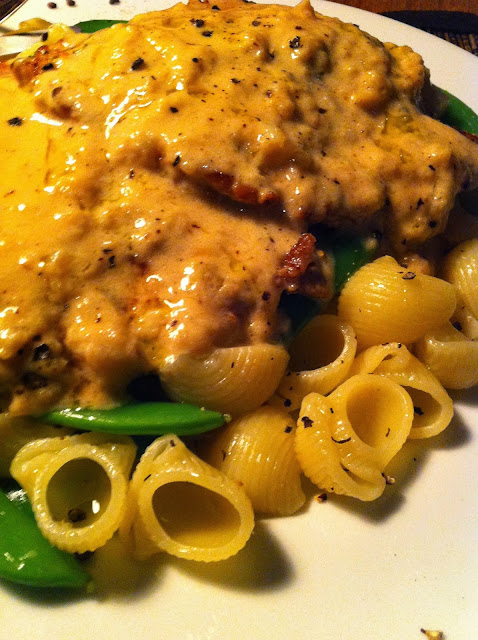 Season the pork escallops and heat a little oil and butter in non-stick pan. Fry the pork for for one to two minutes on each side. Remove and set aside. Slice the apple and place on the pan. Fry until soft and then deglaze the pan with the Calvados then add about 250 ml of apple cider and allow to reduce. When about a third of the original quantity remains switch off the heat and add the cream and mix. Return any juices from the pork to the mix. Place the pork on a serving dish and pour over the apple slices and cream.

Here we show the dish served with lumache pasta shells and sugar snaps. Boil the pasta as per the packet instructions and add the sugar snaps one and a half minutes before draining. Drizzle olive oil over and serve as a bed under the meat. 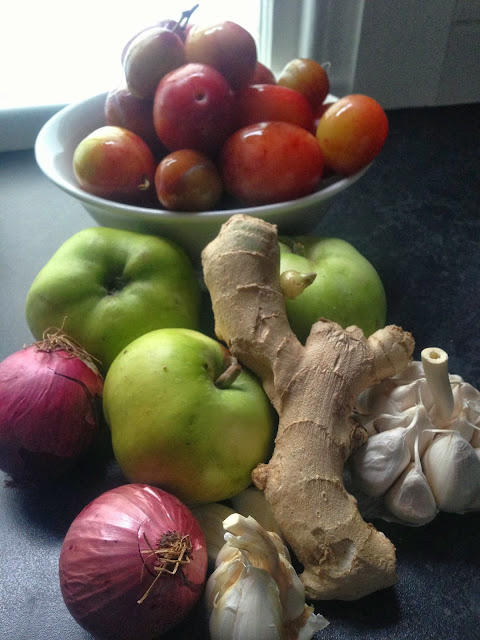 The plum tree at Tatjana's allotment is undoubtedly temperamental! For a number of years there has been barely any fruit worth talking about and one or two apple and plum crumbles were about all we managed to muster out of the harvest. Ah... But not so this year. The branches positively groaned under the weight of fruit and in some cases were bent almost double. Even the voracious appetite of the raucous parakeets that frequent the skies over the Chiswick / Acton boarder lands couldn't devour the bountiful produce. Determined to take advantage of this bumper crop Ghaz insisted we all stagger home with as much fruit as we could carry to experiment with fruit chutney recipes. As usual our recipes are intended as a guide and are very forgiving. You can make this recipe your own by adding some of your favourite ingredients - here for example we would suggest sultanas or dried cranberries or dates even! Peel garlic and blend with ginger until a smooth paste. Peel and thinly slice the onion and place in large saucepan with the paste. Peel, core and chop the apples and add to the pan with spices, vinegar salt and sugar. Gently bring to the boil stir and simmer about 30 minutes or until the apple is cooked and pulpy.
Meanwhile stone and quarter the plums and add to the mixture and simmer for 40 minutes until plums are cooked but still retain some shape. Bottle cold after a few days and seal. Once opened use within a month.