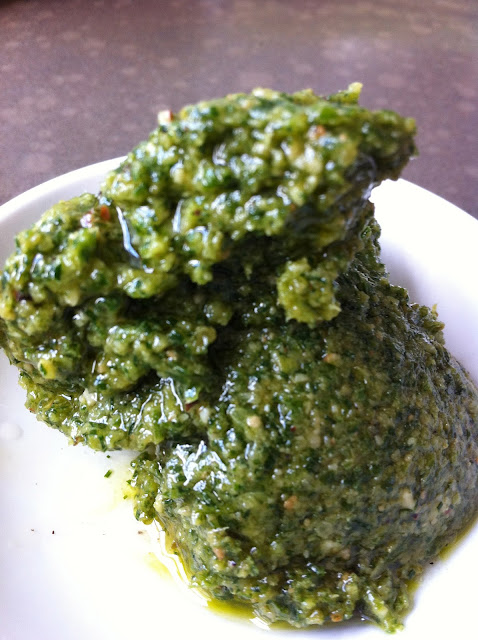 There are a few things we always like to have in the fridge which can be lifesavers when you are caught on the hop and have to prepare something to eat unexpectedly. Pesto is one of those. It is a wonder ingredient which is sure to inject flavour magic and zing to many recipes. When made, as long as the Pesto is covered with olive oil to prevent oxidation and kept is the fridge it will keep for ages and is an excellent way of turning left over fresh herbs into a flavoursome and useful paste.

At the very least a spoonful of pesto can transform bland pasta or mash potato and when added towards the end of cooking to a casserole or stew will lift the dish to a new dimension. Mixed with a little breadcrumb pesto will make an excellent crust to cover and flavour grilled salmon or sea bass. It is also fantastic for presentation and interest when let down with a little more olive and used as a garnish drizzled around dishes.

Most people associate pesto with the soft herb Basil and this is indeed a lovely one but in reality it can be made with any single soft herb or combination. You can even use a strongly flavoured leaves such as spinach, wild garlic or rocket. We suggest you try to make your own personal version which will help stamp your own personality on each dish you prepare. Traditionally toasted pine nuts are used as an ingredient but these days we find them quite expensive and tend to use them in dishes only where they can be seen. Roasted peanuts, cashews or walnuts are a reasonable substitute.  Just blitz the ingredients and store in a jar, covered with olive oil. 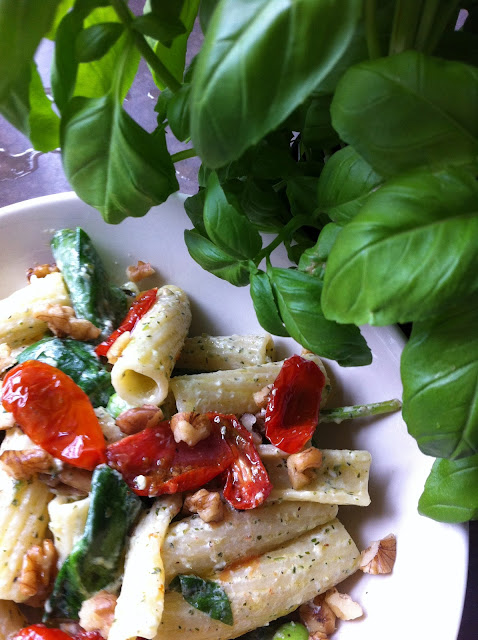 Ingredients
Any mix of the herbs below...
Experiment!!

Whizz together and test. Adjust and season to taste.

Email ThisBlogThis!Share to TwitterShare to FacebookShare to Pinterest
Labels: Vegetarian

Me Me on Broadway!

"They say the neon lights are bright on Broadway,
they say there's always magic in the air..."
The Drifters 1963 and George Benson 1978

For years we had a house at the end of the King's Road in London where our nearest tube  stop and village "hub" was Fulham Broadway. To call it a "hub" is probably a misnomer as although only a stone's throw from the world famous Chelsea football Stadium it could only be described as a cultural and culinary desert. There was absolutely nothing there except the underground and the extortionately expensive Blue Elephant Thai restaurant (now defunct) accompanied by a motley collection of run down, cheap and nasty pizza and kebab joints and charity shops. Pretty dismal to say the least!

Well wouldn't you know it the moment we moved away all that changed. After years of neglect Hammersmith and Fulham Council finally got their act together and thanks to a panoply of urban improvement policies a number of key sites were redeveloped, streets repaved, buildings cleaned up and given new uses, smart apartments built and there is now even an uber trendy Conran restaurant. To cap it all off continental style pavement cafes suddenly appeared to complete the transformation. The station entrance was reconfigured and a brand spanking new shopping centre and multiplex cinema was built accommodating a food court (all chains admittedly) on the first floor. The old station building became a wonderful organic food emporium, sadly since closed down, but in short it's fair to say the Broadway has blossomed and is now achingly trendy!


We're very pleased to see too that this new life has spilt out to the surrounding area and also spawned several interesting new independent ethnic eateries. Our favourite is "Me Me" a Vietnamese restaurant directly opposite the old station entrance. Roughly translated as Mama's, Me Me is presided over by  the charming and friendly Marie (she told us her real name but prefers her adopted one!) the cooking is wonderful and we find ourselves returning again and again for inspiration and to try something we haven't ordered before. This time round it was Goi Duck and Bun Xa for starters followed by Bun Thit Nuong (Sizzling pork and noodles) and whole sea bass with mango.

We stayed there chatting to Marie as she sat at the next table de-husking an enormous bag of bean sprouts and we have to say it is not without a deep sense of irony that we find ourselves enjoying the atmosphere and the food and remembering how the Broadway used to be so different when we actually lived nearby.


If like the Archies you are in the mood to pour a little summer sweetness over some one you love try this... Based on the classic Eaton Mess this is a version adapted for high summer with seasonal berries but many fruits can be used, for example at a party recently we served a baby version in shot glasses with pineapple and passion fruit to wrap up the evening. Needless to say they went down very well! Whichever fruit you prefer it is an easy dessert guaranteed to impress the nearest and dearest and make their life so sweet! We have to admit we use the much maligned shop bought meringues. Although on the dry and crisp side we think they are acceptable once well combined with the other soft ingredients. A word of caution though this desert cannot be made too far in advance as even the crispiest meringues will soften and loose that all important crunch factor!

Wash the fruit. Make a little simple syrup ( 1 part water to 2 parts sugar, boil until reduced to a syrupy consistency and allow to cool . Crush the raspberries and mix with the syrup to make a colourful compote. Keep some whole fruits back to use as a garnish. Gently fold the meringue, cream and fruit together. Pick suitable serving glasses such as tall cocktail glasses or sundae dishes. Spoon in the cream mix interspersed with some of the compote to create a marbled effect. Top with cream and fruit. Keep cool until ready to serve.

Our Afghan fishmonger friends on the North End Road frequently have delicious sea bass on special offer. It comes in various sizes, the smaller and medium ones can be stuffed and served whole. Portion wise it's one fish per person. We usually wrap them "en papillote" with a little lime, ginger, chilli, soy and mirin and steam in the bamboo steamer for about 20 mins.

With the larger fish we can get two portions from each. The fishmonger will fillet it and save me the head and bones with which I make a quick stock* The two fillets are very easy and quick to cook and the quality of fish is so good the golden rule "Simplest is Best" always applies here. Simply smear a little olive oil over the fish, sprinkle salt over the skin and place skin side down on a reasonably hot pan. If the fish buckles sightly keep it pressed down with a fish slice. Cooking it on the skin side protects the flesh from burning so about 85 - 90% of the cooking should be done on this side. After about three mins turn the fillet over and finish off on the flesh side. Remove from the heat and hold in a warm oven if necessary. The residual heat will cook the fish through. To garnish cut a lemon in thick slices, rub some olive oil on the cut sides and place on a hot pan for 2 mins. The lemon will caramelise slightly giving an attractive appearance and extra flavour. This can be done in advance as they will keep for several days. The fish looks best if served on a little nest of wilted and drained spinach leaves or for something a little different try using laver seaweed. We buy the dried variety in China Town which just requires re-hydration with a little hot water. It can be salty so do not add any. We find a little cracked blacked pepper and sesame oil are best good additions. To serve lay the fillet over the spinach or seaweed, drizzle with olive oil and sprinkle with crushed black pepper. 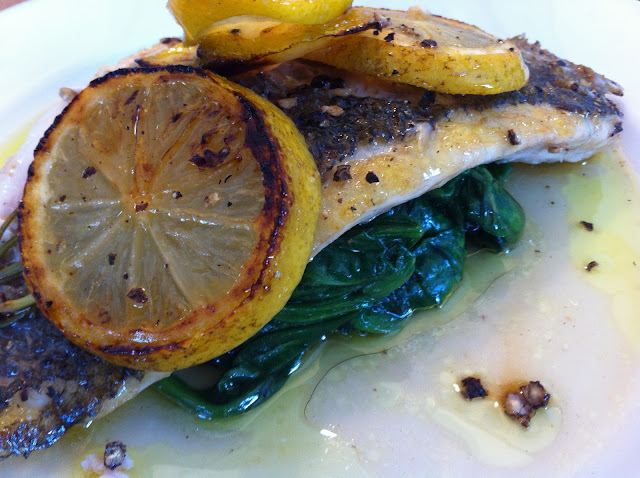 * To make fish stock wash the head and bones clean under running water. This helps prevent any scum forming on the surface of the stock. Cover the fish bones with hot water and simmer for about 15 minutes. Then drain and save the stock for future use. We put our stocks in freezer containers, label them and freeze for future use. Always handy!
No comments:

Gold, silver bronze....!! Is watching all these super fit Olympic athletes making you feel slightly sluggish and out of shape? Well here's the perfect summer dish which might help. Crunchy raw carrots are a wonderful and healthy accompaniment to many dishes both hot and cold. Coleslaw is popular but for a change we thought you might like to try this simple Asian version which drops the mayonnaise. Here we suggest using just carrots but white cabbage, celeriac and mooli (daikon) are delicious mixed in too. This carrot salad which is best made a little in advance is incredibly versatile and great as a side to grilled chicken, red meat and fish or even pasta dishes such as lasagne and chilli con carne where the hot/cold contrast plays with the taste buds and lends interest. The quantities below are a guide. You are looking for a pleasant balance between the acidic ingredients the salt and the sweet and you'll only really achieve that by tasting. The recipe calls for a little mirin widely used in Japanese cooking. It's sweet and may contain a little alcohol but once you have it in the cupboard you will start finding many uses for it. Rice wine vinegar also called rice vinegar is one step more in the process which creates rice wine. It is also far more acidic. By the way sultanas or chopped dates or apricots will add a fruity note for variety. The mix will keep in the fridge for several days but the acids will "cook" the carrots slowly softening them.

Mix the first seven ingredients in a small bowl and stir to dissolve the salt and sugar. Grate the carrots in a food processor (we find the julienne attachment gives the best results) and place in a mixing bowl. Pour in the marinade and mix well. Leave for a few minutes for the flavours to blend and the walnuts to soften slightly and loose their bitterness. The salt will draw a little moisture out of the carrots but don't worry this is normal. Either drain off or mix back into the grated carrot. Serve slightly chilled with a sprinkle of black sesame seeds.
No comments: