Let's hope this one will make Mondays a little more passable for Bob Geldof and his eponymous vermin from Boomtown. What to do with the left over cold meat? This is a conundrum we all face from time to time usually on a Monday when the sad and weary bones of the Sunday roast are still peeking out at us forlornly from under a blanket of tin foil on the middle shelf of the fridge. Too much to just throw in the bin without pangs of guilt but not quite enough to make up the number of portions required without appearing parsimonious. Well here's a suggestion that's fun, tasty, economical, healthy and will magically stretch a small amount of cooked meat to almost infinite quantities to feed all. Almost any cold meat would be good but chicken, turkey, pork, duck and beef are ideal. Cooked prawns also work well in this dish. (By the way if you are using roast chicken or duck don't forget to boil the bones for stock once you've scavenged the carcass for all usable shreds of meat.)

How about fishing out the chopsticks and venturing eastwards for an egg noodle supper? Why egg noodles in particular? Well no reason really apart from convenience - rice or "glass" noodles would do just as well - but in recent years egg noodles have become easily available with most supermarkets selling the vacuum packed ready to use variety. If you can't get these however try the de-hydrated types which just require either soaking for a short length in hot water or boiling and straining prior to adding them to the rest of the ingredients. The directions will be on the pack. The beauty of the ready to use brands is precisely that! They are ready to use. The down side is they have a limited fridge life whereas dried noodles will last almost indefinately. In 2002 Chinese archaeologists discovered an earthenware pot full of identifiable noodles over 4000 years old!! We don't recommend keeping them that long however. Probably best to observe the best before date! 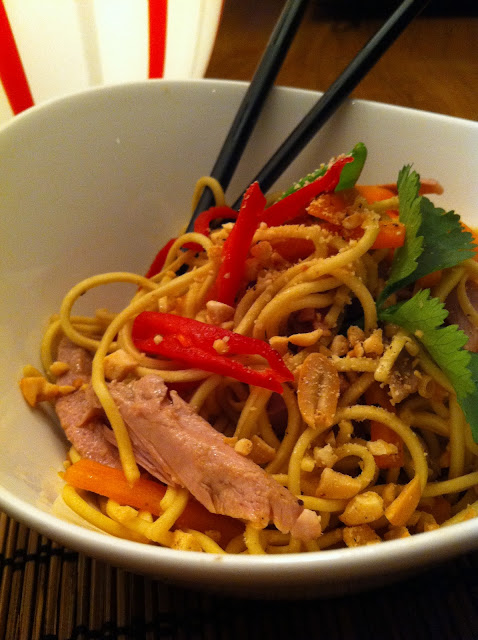 Method
Mix the ingredients for the dressing in a small bowl ensuring the sugar is dissolved and set aside to blend. Taste and adjust if necessary. You are looking for a balance of sweet, sour and fragrance.
Prepare the noodles as per pack instructions and put in large mixing bowl. Meanwhile blanch all vegetables apart from the spring onions. Drain and add to noodles with the meat.  Add  the Asian dressing and toss well. Turn into a serving bowl and sprinkle  coriander and crushed peanuts over and serve.
No comments: 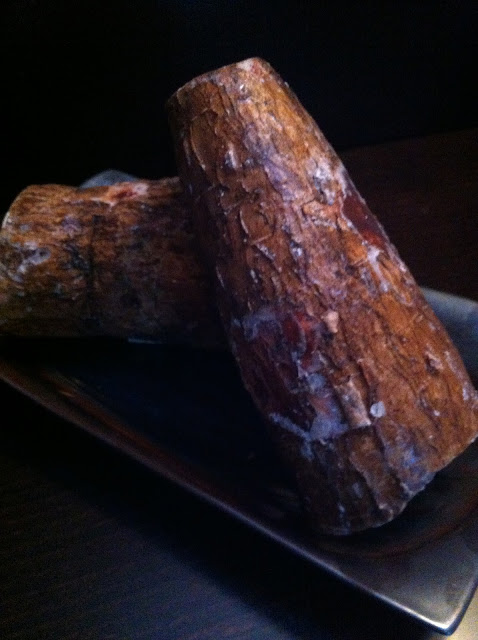 You've probably eaten cassava many times in the form of tapioca without realising it. Known also as yucca, manioc, mandioca, kamoting kahoy and mogo Cassava has it's origins in South America and was first domesticated there over 10,000 years ago. Brought to the African continent in the 16th Century by Portuguese traders it is now a major food crop with Nigeria being the world's largest producer, Asian countries such as Thailand and Vietnam are also major exporters which now far outstrip Brazil and it's other Latin American countries of origin.

Although low in proteins and toxic if eaten raw it is high in starch, thrives on marginal soils and is drought resistant. An area the size of a football pitch will yield 14 tonnes of cassava per year whilst the equivalent yields for rice and wheat are 3.1 and 1.8 tonnes respectively. So it's not difficult to understand why it's been called the bread of the tropics.

Here in London we've often seen it on sale at the market and the Middle Eastern shops which line North End Road but have never tried to cook it before until, that is, we recently came across a delicious version at the famous Regency Club which prompted us to try it at home and post this suggestion.

The Regency Club is a north London institution which defies description. Formerly a private members club located on the green near Queensbury tube station it is now a wonderful Indian gastro pub style restaurant. It's in the heart of North London's Gujarati community and has a unique ambiance and is extremely popular, their version of garlic mogo being an undoubted signature dish - along with chicken wings and tandoori lamb chops. But that is another story, let's go back to mogo! 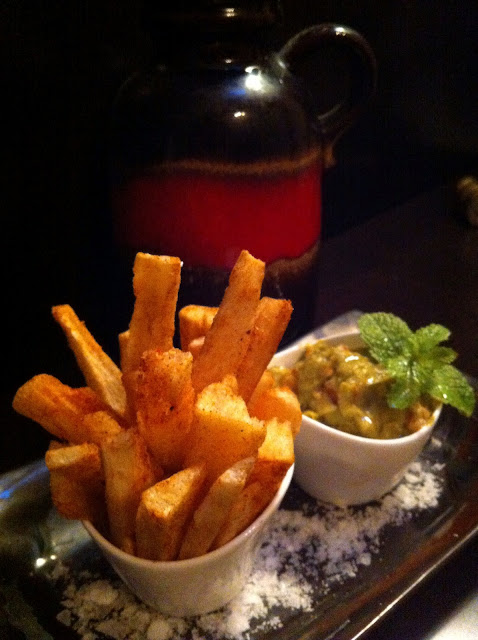 The Regency Club's Garlic Mogo is basically deep fried chips in spices and the version we came up with at home is simple to prepare.

First cut the cassava into 4 centimetre lengths and peel off the rough brown skin. Cut each piece lengthways into chips, removing any discoloured or stringy fibres which sometimes appear in the older roots and boil in salted water for a few minutes until the chips can be pierced easily with a kitchen knife. (Ghaz says he remembers his mother serving the boiled cassava with curry when he was a kid and it was delicious!!)

Drain and allow to dry on a kitchen cloth. Meanwhile heat vegetable oil to a depth of 5 or 6 cms until slightly smoking or approximately 190 C. Gently place the chips in the hot oil and leave to cook for 4 to 5 minutes or until the chips begin to turn golden. They should be crisp on the outside with a soft interior. Once you are happy they are ready tip onto a paper towel to drain any excess oil. Sprinkle with your favourite seasonings. We suggest a mix of salt, white pepper, cayenne pepper, garlic salt, celery salt paprika and chilli!!

Delicious with ketchup or aioli or dips such as guacamole! 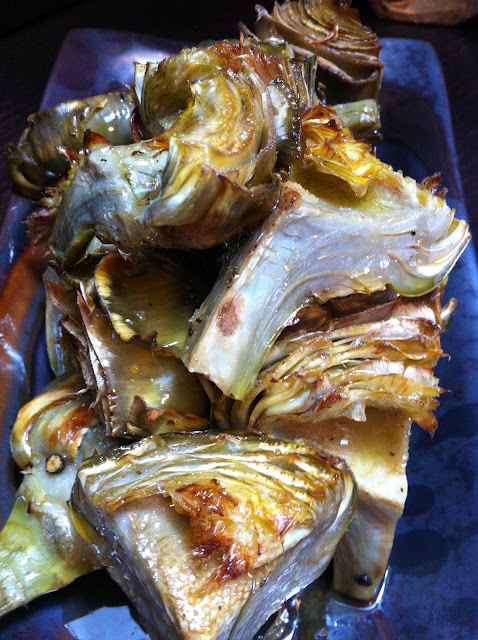 We love artichokes and always try to make up a couple of jars whenever we are in Barcelona as a useful standby. They are a great accompaniment to the meatier tapas dishes. Artichokes are much cheaper and more available there as after Italy Spain is the biggest European producer so you can also rest assured they have not clocked up too many food miles. Originally thought to be from North Africa where they are found in the wild they take their name from the Arabic Al-khurchuf. Used in Southern  Europe since Greek and Roman times when their medicinal qualities were recognised they are nowadays a strong contender for the acolade "super food". They are great antioxidants, strengthen liver, bile and gall bladder functions, reduce cholesterol levels and aid beneficial gut bacteria.

Here in London artichokes made their debut on the market stalls a few weeks ago and will continue their run for some time yet. Preparation takes a few minutes but is straight forward enough so it is probably worth doing a few at the same time and storing them. Before you start have a bowl of water with a few drops of either lemon juice or vinegar added to stop oxidation and a large waste bag for the discarded leaves and stalks. 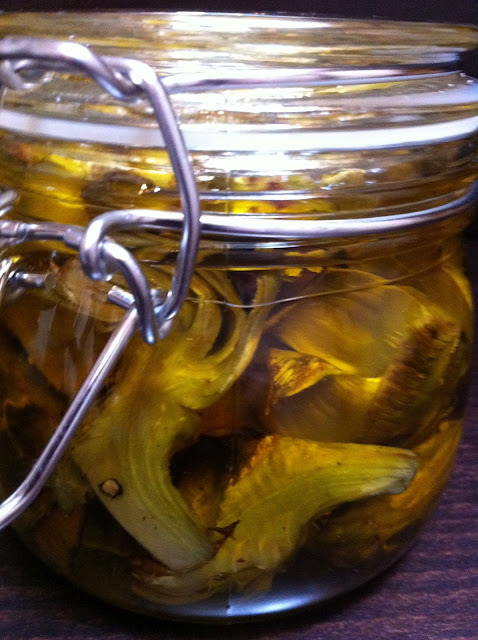 We generally begin by cutting off the the top (Probably about 1 - 2 cms from the stem, you may find a serrated knife best for this) and removing the woody leaves until the softer greener leaves are revealed. Quarter the artichoke, then scoop out the central hairy "choke" with a teaspoon. Depending on the age and size we generally leave about a half centimetre of the stalk attached. Place in the acid water as quickly as possible. When you have them all prepared blanch them in salted boiling water for about 3 to 4 minutes then place on a baking tray with a little olive oil and seasoning and put in a hot oven for a further 7 or 8 minutes or until soft when prodded with a knife. Allow to cool and place in a preserving jar and cover with olive oil. They will keep for several days. Alternatively you can brush the raw artichoke pieces with oil and place on a hot grill until slightly charred.
This method is best for young to middle sized artichokes but for larger artichokes where the leaves have become woody remove the stem entirely and boil whole in salted water for about 15 - 20 minutes. Then serve standing in a soup bowl with a melted butter or vinaigrette dip. Diners can remove each leaf and scrape out the flesh with their teeth before removing the hairy choke with a knife and eating the fleshy base.

At the North End Road Market we recently spotted scallops on the fishmongers stall. They looked so fresh and inviting we decided to treat ourselves to these delicious fruits of the sea. They are an extremely versatile shell fish but can be a little bland therefore it is probably best to combine them with a relatively strong flavour such as mild curry paprika or chorizo and smoked bacon. When we got them home we decided to have a little fun coming up with alternative treatments. Ghaz decided to steam his and came up with  a delicious Asian based jus whilst I looked towards the Emerald homeland for my inspiration and pan fried mine with pea puree and boudin noir (black pudding).

Scallop shells are an iconic shape so we always like to use them for presentation and serving. To open the scallop gently prise open the shell near the "hinge" the shell should open relatively easily, then gently remove the fleshy parts with the back of a dessert spoon. Always use a dish cloth to protect your fingers when opening shellfish. The edible parts are the large white muscle and the orange coral although many people prefer to eat only the muscle. The remaining intestines etc should be washed off and discarded. 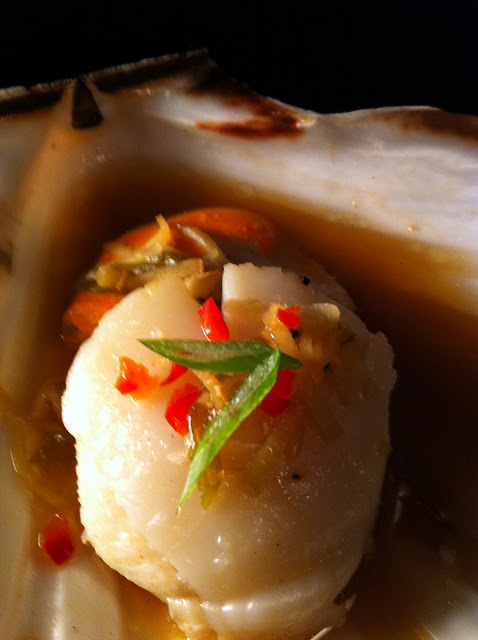 Shell the scallops as described above, place on some crumpled tin foil or a small dish in a steamer and pour over the jus. Cover and steam for about 8 to 10 minutes or until flesh turns white and firm. Put a few drops of sesame oil into  pan and warm. Thinly slice the garlic add to oil and gently sautee. Remove, arrange on the shells and pour over the jus and garlic sesame oil. Garnish with chopped chive and a little sliced chilli and ginger. 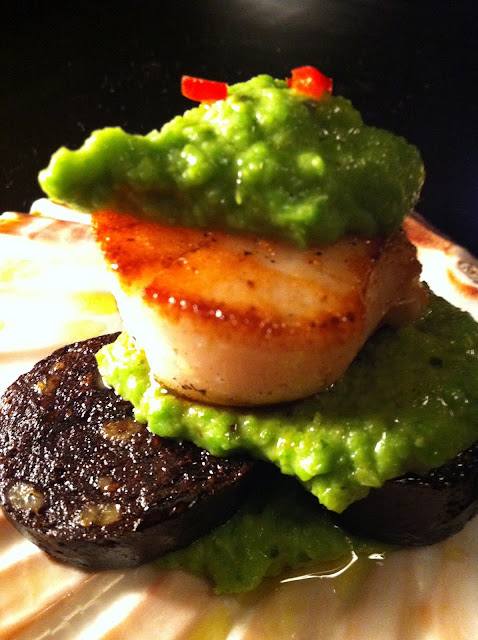 Prepare pea puree in advance by boiling peas and blending with a little fresh mint and butter. Heat a pan and fry slices of black pudding for 3 to 4 minutes on each side. Rub each scallop in olive oil place on the pan and leave for about 2 minutes then turn over and repeat. The flesh should be lightly caramelised. Arrange the black pudding scallops and pea puree as per the photograph. Garnish with a little red chilli and/or fresh mint leaves.