OK, OK, we know the song is about Mexico not Spain but the lyrics seem to fit... well sort of!

A week or two ago between a 60th birthday buffet and a 21st celebration the IF chefs had an opportunity to take a short break to carry out a little research and development in our favourite Mediterranean city - Barcelona. We were invited to stay at a friend's bijou penthouse apartment overlooking the harbour in the distinctive Barceloneta quarter of the metropolis. So temporarily forsaking our usual pied-a-terre (Jose's cool, contemporary and brilliantly designed Eixample flat on Avenida Aragon - which in any event was already booked) we were delighted to take up the offer to stay in Piotr's "Beloved Barceloneta!".

Barceloneta is a self contained triangular city district which forms a promontory on the north side of Barcelona's impressive harbour. One side encloses multi-million pound sailing craft whilst another, more democratically provides accommodation on a sandy beach for anyone brave enough to attempt to find a patch sufficiently large to unfurl a beach towel and brave the blisteringly hot sunshine!

Built on a grid pattern in the 19th century to house fishermen and their families, sailors and other dock workers it is a staunchly working class barrio, only thinly veiled by a waifer veneer of uber trendiness and paella tourist traps. Consequently the buildings are modest and the streets tightly packed but thankfully despite its increasing desirability amongst outsiders has not lost its wonderfully unique character.


The landmark food market, which is the neighbourhood's centrepiece, has been recently refurbished beside a new civic square which in turn boasts a number of Michelin star eateries. Behind the flat there is a wonderful artisan bakery whose croissants would rival anything central Paris or Vienna has to offer and numerous querky resaurants which actively discourage "giris" (foreigners and tourists).  One of which, a favourite of Jose's, has no sign outside, serves soupy rice as its signature dish and started out life when one fisherman's wife was persuaded to cook a meal for the entire boat crew each time they returned to port! Even today you still get the overwhelming impression you are eating in some one's front room!

One of our favourites though does have a sign which says "La Bombeta"  a tapas restaurant on the Calle de la Machinista with a wood panelled and formica 1950s interior straight out of la dolce vita and a hand painted sign proudly proclaiming that.. "we don't speak English but we make f***ing good bombas!" It was so true too, the maitre spoke Castillian and the bombas, croquettas and morcilla were out of this world! Try it if you get a chance but don't go late at night as you won't get a table!

On a slightly sweeter note the best ice cream on the peninsula was from a parlour Jose introduced us to, the newly arrived Vioko which proudly displayed all its flavours in three languages (Catalan, Castillian and English). We tried the hazelnut and an off piste grapefruit and jasmine both of which were delectable! Giris very welcome!

Further into the shop delicious dark chocolate was on offer whilst rows of colourful macaroons had all the appearance of Damien Hirst spots lined up and waiting to be applied to his latest canvas!

On the beach front we had a delicious lunch at Kaiku very recommended.

Further afield Jose took us to eat at two trendy new eateries Cornilia and Co on Calle Valencia which also has an interesting deli and wine shop and where we chatted to Cornilia herself who was taking a break and a quick bite at the next table, and the former Moritz brewery turned bistro on Ronda San Antoni near the plaza Universitat. This is a beautiful old beer factory now cleverly converted by the Moritz family into a large restaurant with a comprehensive and central Eurpoean influenced menu. The complex boasts a bakery and shop and still makes just enough beer on the site to fill the pitchers on the dining tables. It is well worth a visit.

Posted by incredibly fedhttp://www.restaurantkaiku.cat/
No comments:

Misheard lyrics from the southern seas aside this one really is enchanting! It is inspired by the Peruvian and Nikkei fusion cuisine on offer at Pakta, the Adria brothers' latest eatery in Barcelona which we had the pleasure of visiting recently. (See post 6th August 2013) Based loosely on Pakta's ceviche of sea bass and kumquat, its flavours are sophisticatedly subtle like most of the fare on offer there. Very easy to do, it is guaranteed to raise eyebrows and win accolades from every corner of your dining table. It is a salmon and ruby grapefruit ceviche with maracuya (passion fruit) syrup. The blend of bitter sweet fruit juices together with sashimi will blow your socks off! 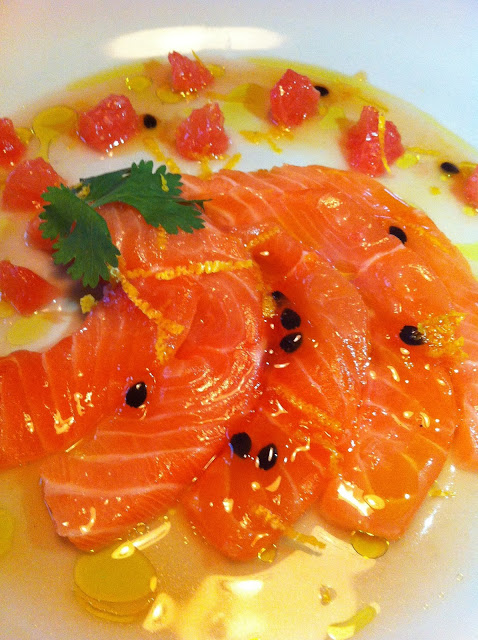 
Syrup - Half and de-seed the passion fruit add the orange juice, lemongrass and sugar. Bring to the boil and simmer until mixture has reduced and is syrupy. Allow to cool.


Peel the grapefruit by cutting off the top and bottom and remove the skin by cutting down the sides of the fruit following its curve. Cut between the segments with a very sharp knife to produce slices which have no pith or stringy bits. Set aside squeeze the juice out of the remainder Thinly slice the salmon and arrange on a plate. drizzle olive oil over and spoon over the grapefruit juice and a little of the syrup. Sprinkle a little salt over. Arrange coriander leaves and lemon zest on top.

Why wait till you go to Spain to enjoy a gorgeous gazpacho? Now that the weather is so warm and tomatoes and cucumbers are so plentiful in the market what better lunch or starter than an ice cold super summer soup. Oh and do we need to mention its economical and very healthy too? 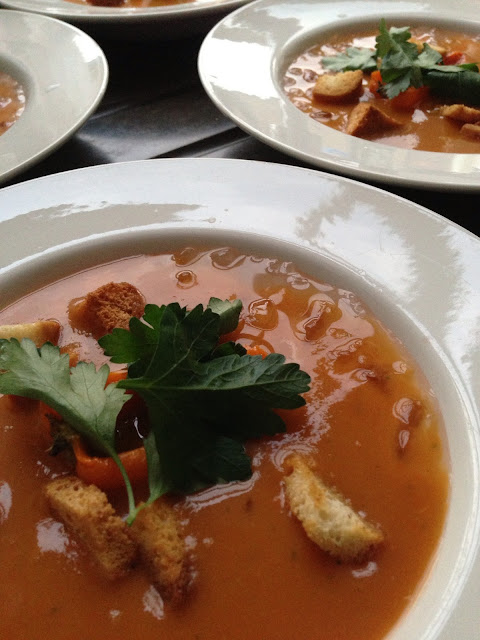 Method
Slice and de-seed the peppers, season, drizzle with olive oil and place in a pre-heated oven at 180 C for about 25 minutes. In the meantime core and de-seed the tomatoes, peel the cucumber, slice in half lenght-wise and scoop out the seeds. Place in a food blender or liquidizer with the peppers and any juice on the baking tray. Add the juice of a lemon, tabasco, Woscester, vinegar and sugar and a little water and blitz for several minutes until soft and creamy. You will need to let down the pulp further at this stage with a little more water until you are happy with the consistency of the soup. Now place in the fridge for several hours until very cold. Taste and finally adjust the seasoning and maybe dilute a little further. Add the lemon zest, garnish and serve ice cold.


Posted by incredibly fed
No comments:

"Su reserva esta confirmada" the email read. It had just been sent to us by Jose in Barcelona who was so chuffed at having secured a booking at this the latest of the Adria Brothers' new stable of eateries, more or less all located in the Poble Sec district of the Catalan capital, that he felt he should send us the proof!

Pakta the website explains is an indiginous Peruvian language word meaning 'Together or Union" and the restaurant is so called because it brings together two chefs, one from Japan and one from Peru to create this fusion menu. Japan and Peru, readers are informed have had a long association and Nikkei cuisine is very popular in Peru.

As we seated ourselves the delightful and very pretty Sussie Vilanova our Filipina-Danish hostess introduced herself and brilliantly guided us through the whole gastronomic oddyssey. (We were even told where the beautiful white glass and porcelain crockery was sourced!) At the onset perspective diners are advised to allow two hours for the whole experience but for us I must say this was way out - it was more like three and a half with no programmed breaks for cigarettes or the loo which you are encouraged to request!! Such a contrast from London eateries where you are shushed off the table after one hour twenty. Furthermore a quick calculation indicated no more than 30 covers and a staff to customer ratio way in favour of the customer! The place is small!

The choice is simple there are two taster menus with between about 14 to 18 courses, one is slightly longer than the other but Sussie carefully explained to us that the actual quantity of food was similar as the portions varied and that we should make our choice based on personal preference not quantity! In true democratic style the entire table is obliged to agree on one menu or the other.

It would take far too long to discribe each course but once our little troupe embarked on the voyage there was nothing but ooooos, ahhs and ghasps of delight as Sussie held us all spellbound with her knowledgable presentation of each new dish and we listened enthralled to a description of its social history, component ingredients and cooking techniques.