I have recently been at home a lot recovering from a bout in hospital. Pretty boring you might think but one of the few advantages was the enormous amount of sympathy and attention I got from my close friends. For a few weeks they were my lifeline to the outside world. I did look forward to the visits and listening to all the news. Absolutely everyone seemed to be in the process of making elaborate travel arrangements. Callers would come, sit on my sofa and chat, telling me all and in addition to the usual tittle tattle, latest stories and gossip plans to go skiing and forthcoming visits to Italy, India, Thailand and even Tasmania were all mentioned in some depth. Even one of my long lost Irish cousins turned up en route from her farm in Clogher Head, Co Louth to a 60th birthday celebration in Cyprus! Apart from being a captive ear my role was to serve up tea (Twinings "Chai" was the blend of choice) and well...... what ? I thought buying cakes was a bit of a cop out so I needed something to keep on standby, sweet and delicious  that I could make with the minimum of effort (as I was not able to stand for very long). Well, luckily I discovered just the thing which fit the bill perfectly.....

This is an adaptation of a recipe from Eric Lanlard - "The Cake Boy"  himself. A version of chocolate tiffin which he demonstrated on his Channel 4 TV programme "Baking Mad". It is easy to do, requires no baking and no more cooking skills than melting chocolate and chopping biscuits. The version Eric makes with it's milky chocolate which he calls Chocolate Honeycomb Squares looks like it is designed to cater for younger gourmets and would be the one I would prepare if was cooking for a children's party, but as none of my visitors were likely to fall into this catagory I tweaked the ingredients to suit a more adult palate. Children of all ages as it were!! I followed his basic recipe and ratio of ingredients but substituted dark orange flavoured chocolate for his milk variety and added in some cherries soaked in liquor. The resultant tiffin biscuit cake was delicious even if I do say so myself! 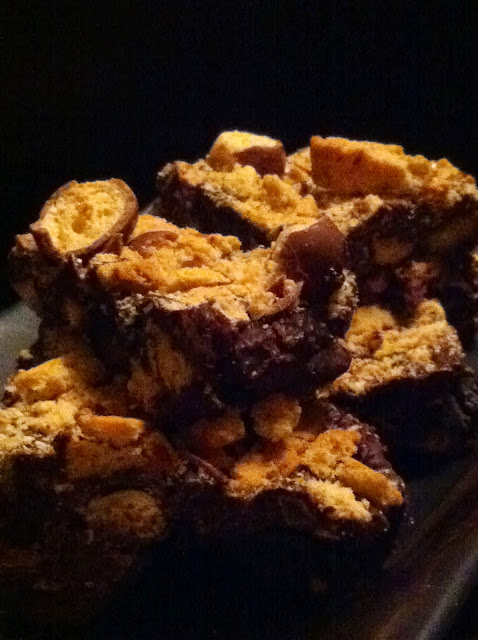 Line a 20 cm square baking tray with grease proof paper. Melt together the butter syrup and chocolate in a bowl over some boiling water then add the crushed biscuits, Malteesers and cherries. Mix together quickly and pour into the tin and chill until set. You can serve the tiffin as it is or decorate with more melted chocolate (to act as "glue") and sprinkle with crushed biscuits, cherries and/or honeycomb sweets.