Once upon a time Knightsbridge was our paradise, our Garden of Eden and Adam was there nearly every week hunting for and clothing himself in fashionable labels - Absolutely Fabulous! Then on Sunday evening the buffet and dance party at the Roof Gardens on High Street Ken provided the perfect venue to show them off! Oooh such sophistication! Somewhere along the line late night shopping arrived, a welcome innovation which meant there was yet another opportunity for retail therapy one evening after work. Naturally this was hungry work and one of our favourite haunts for a post shop meal and recovery period was the very 80's inspired Chicago Rib Shack hidden just across the Old Brompton Road near Harrods. At that time there were several branches around the city but we always seemed to gravitate towards this one after navigating around and exercising the plastic in Harvey Nix and the rest of the boutiques and emporiums of Sloane Avenue.

Sadly some years ago it was demolished in a major redevelopment and replaced by the equally wonderful Zuma which we also love but that is another story. I have to confess we do miss the ritual of donning the plastic bibs and the wickedly guilty pleasures of the Rib Shack's wonderful retro bar-b-cue rack of ribs, onion loaf and fries with extra bar-b-cue sauce on the side. So naughty!

Malheuresement these days bargain shopping has been substituted for the designer variety. Now it's more Uniglo than Ungaro and Primark than Prada, and we make our spare ribs at home.

You can google many recipes and methods but after many trials and expriments here is our definitive Incredibly Fed version.... 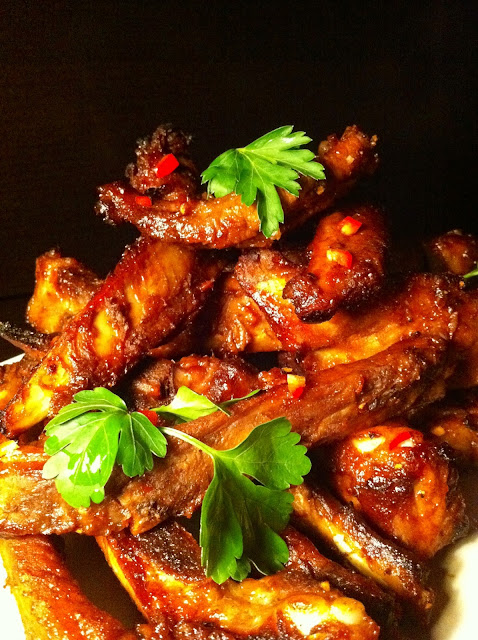 Method
Fill a large saucepan with water and add two star anise, a cinnamon stick, 2 bay leaves and 4 cubes of un-peeled ginger. Place the ribs in the water and bring to the boil. Remove any scum that may form and simmer for 20 minutes. Meanwhile mix all the marinade ingredients in a bowl. Remove the ribs and place on kitchen towel to dry. Discard water. Cover the ribs with the marinade and massage to ensure each is covered evenly with the mixture. Place on a large baking tray and place in the oven pre-heated to 180 oC for approximately 30 to 40 minutes to glaze the ribs. It may be advisable to turn them once or twice and to re-brush with extra marinade.