Last Sunday the Indian summer was in still in full gear so we got up early to visit the first-Sunday-of-the-month Chiswick car boot fair... Quite an entertaining experience for the princely sum of £1.00 and very reminiscent of another of our favourite old haunts  - Incants flea market in Barcelona. If you, like us fancy a good rummage well then there are no better places. Just stick a few bob in your pocket and go with an open mind and see what appears. Having made a modest purchase to support the traders we continued on to the nearby farmers market for fair trade coffee and then to Tatjana's allotment where late summer's wonderful bounty was ripe for the picking. Tatjana's plot neighbour John has an extensive plantation with just about everything that grows in this climate on offer. It is undoubtedly one of the best allotments on the site with neat rows of trellis and raised beds between manicured paths and trimmed bushes and trees. Thanks to their generosity we staggered away at the end of the day with all we could carry and have been cooking ever since.

One favourite which we tried out the next day on some of Ghaz's girlie friends to great effect was undoubtedly the forager's crumble. To give this very popular dessert a twist and to make it our own so to speak we played around with both the filling and the topping using up ingredients that were to hand. Making the basic topping is easy but to make it more interesting many recipes recommend that you also add various breakfast cereal type ingredients such as muesli or porridge oats or even crushed biscuits of various sorts. In our case we added an assortment of ingredients which we found in the cupboard and which needed to be used up - namely coconut flakes, pumpkin seeds, chopped walnuts and toasted almonds. Keep in mind that you are seeking to achieve a slightly sweet and crunchy topping to compliment the soft stickiness of the fruit filling. Similarly for the fruit filling many candidates are eminently suitable, a base of apples is a good start but the possibilities are really only limited by your own imagination! The exact amounts will vary depending on the amount and nature of your chosen ingredients so the recipe below is intended as a guide only. 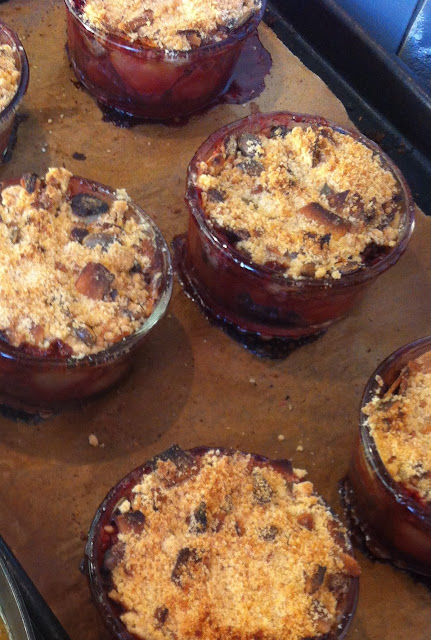 Method
Slice the apples into small chunks and place in a deep pan with the butter and sugar and cinnamon and cherry brandy. Melt the butter and cook for a few minutes until all the ingredients come together to make a good syrupy filling. Softer fruits such as berries and plums should be added when you turn off the heat. Allow to cool. In the meantime place the butter, flour and sugar in a bowl and rum with you fingers until the mixture forms a breadcrumb like structure. Rub for a few minutes but do not over do it! Mix in whatever other nuts and seeds etc you might like to use. Place the cold fruit mix into a baking dish or individual ramekins and cover generously with the crumble topping. Bake at 180C for about 20 minutes or until the topping is a pleasing golden brown.