Neatly sandwiched between the medal winning blooms at Chelsea at the end of May and the thrilling tennis at Wimbledon at the end of June we have what has to be one of the most pleasant periods of the year, the delightful asparagus season. The appearance of those uniquely flavoursome green spears herald the advent of the summer months and the balmy days of the season to come.

Now those of you who are regular readers will spot instantly that we have already posted about asparagus. Almost a year ago while staying at a friends' chateau in the Gers region of south west France we raved about white asparagus and bemoaning it's rarity on these shores. This time we'll talk about the green cousins which are more in favour here in the UK.

If you are one of those people who steam their asparagus, very well, but as we pointed out a few weeks ago baking, roasting and griddling will get far more flavour and sweetness from your vegetables so in this case we strongly recommend baking!

Try "paneeing" the spears. Literally "to bread". Peal off any hard skin from the base of the spears and sprinkle with a little plain flour. Beat an egg and roll the spears in it followed by the breadcrumbs. (You can use Japanese panko crumbs or more economically normal bread crumbs as shown here) then place on a baking tray in the oven at 180 C for about 20 minutes. You can finnish off by placing under a hot grill for a minute or two to bring up the colour. Serve with Hollandaise sauce and a strongish cheese such as grilled goats' milk Camambert and fresh crusty bread. 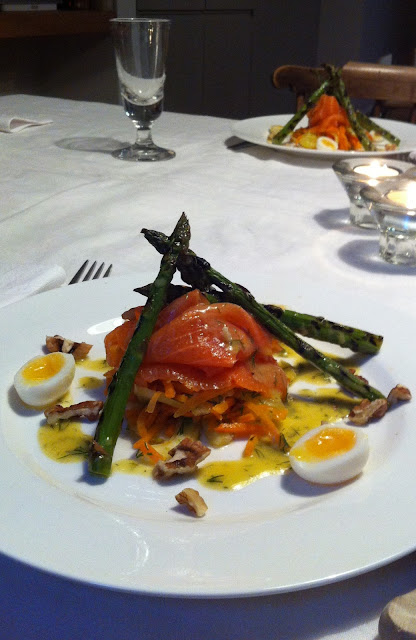 Two weeks ago we were invited with Joyce my visiting cousin from Dublin to Rebecca's North London chateau for dinner after the Chelsea flower show. We volunteered to prepare the starter and chose to use two of her favourite ingredients. Joyce is addicted to  asparagus so on this occasion the green spears were paired with smoked Scottish salmon (another of her favourites) and placed on top of a mooli and carrot slaw with lightly boiled quails eggs (boil for one minute remove from heat and leave to stand for a further minute) and walnut crumbs with an orange vinaigrette. For added panache the spears were arranged in what Rebecca dryly termed "Bonfire night" fashion!