Rice in all its various forms is the staple ingredient of all of the cuisines of Southern and Eastern Asia and Malaysian cooking is no exception. Here we have featured rice dishes a number of times in the past, Sushi rice (with Teriyaki Salmon) and fried rice, for example, but this one really is special. Biryani rice is a classic from India but it's name is actually derived from the Persian word berya(n) meaning fried or roasted as the dish itself was invented in the kitchens of the Mughal Emperors, who were originally from Persia but who ruled the Indian sub-continent for centuries. It is usually served up with a cooling Raita made with cucumber and yoghurt as the rice alone can be slightly dry and spicy. There are many recipes and methods of preparation, some of which can be quite involved but we have developed a speedy version which despite the seemingly long list of ingredients takes only minutes to prepare. You'll be on yer bike in no time at all!!

The recipe we suggest here calls for uncooked chicken and cooked rice but you could substitute cooked chicken or lamb if you prefer. (It can also made with fish, mutton or vegetables, but the rice should always be Basmati as it's less starchy and gives a better finished product.) It's a handy one pan dish so minimises the washing up. We had it many times on our trips around Malaysia but back in London we served it recently to a good friend who comes from the Gower Peninsula, who came around to watch the Ireland v Wales rugby match and it went down a bomb! 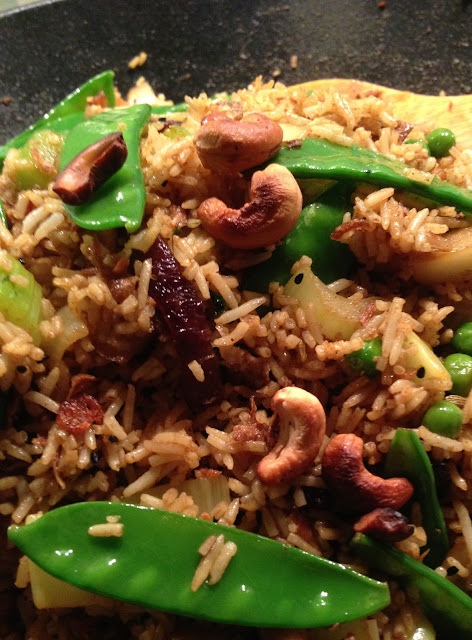 Heat the oil in a wok or deep sided pan and add cinnamon and star anise. As they start to crackle in the heat add the onions and sautee until translucent. Add the chicken pieces and fry until brown then add the turmeric, coriander, chilli flakes, cumin powder, black pepper and garam masala. Sautee for a further minute then pour in the coconut milk, tomatoes (and peas or mange touts). Simmer for approximately 2 to 3 minutes. When almost ready to serve stir in the cooked rice and mix gently. Turn into a serving dish and garnish with chopped coriander leaves, roasted cashew nuts and crispy shallots. Serve with raita (yoghurt, chopped cucumber and seasoning)