Cooking with Romesh - By Ghaz

You'd never guess it from the weather but it's high summer. The weathermen tell us the jet stream is in the wrong place so the rain continues to pour down, flood warnings abound and the countryside is a soggy, muddy quagmire. Still there are notable compensations not least of which is that my old friend Romesh takes this opportunity to escape the sweltering heat of his home in Sri Lanka and visit his friends in London and Cologne. He is one of those lovely people who, although we are not the best at keeping in touch throughout the year we can instantly take up where we left off twelve months previously.

Romesh's surname is De Costa and he was born Roman Catholic but he is adamant there is not a drop of Portuguese blood in his veins! It's 100% Asian he explains, his ancestors having had Christianity and Iberian names "bestowed" upon them during the early colonial period. Like Goa on India's west coast there is also a strong trace of European influence in the island's cuisine which Romesh has managed to master competently, so our bonding catalyst is of course cooking together. At least I should say he does the cooking and I watch all the time asking questions and taking notes. As soon as he lets me know he's coming we arrange a few sessions together in his tiny Barons Court kitchen. I have to say he is certainly not mean with his secrets and loves to share his techniques, indeed he is only too pleased to give me a masterclass when I ask. More importantly than learning a lot we always have great fun together, loads of laughs and refresh a friendship which has lasted ever since we were both pennyless young fashion students and both new kids on the block.


Last Sunday we invited a few friends over to watch the Wimbledon final and while everyone was glued to the TV we made a deliciously mild and light southern Sri Lankan curry, a gentle dal and "Modju" a type of pickle dish made from aubergine, onion and vinegar whose sharpness was just the perfect accompaniment for the dal and meat dishes. (Recipes to follow in a later post)

While cooking Romesh explained to me that Sri Lankan curries are milder as the constituent spices are all toasted whole before they are ground, giving them a unique aroma. When he was young he remembers every home making their own curry powder on a special grinding stone but these days most are bought ready made in the market. Similar to other south Asian curries this dish is coconut milk based but unusually includes tomato to add colour. He says he never uses tinned tomatoes as they are considered a new invention and would never play a role in authentic Sri Lankan cuisine. We made the dish with chicken but pork or king fish would also work well.

First here's how to make the all important curry powder...

Method
In a dry pan over low heat roast separately coriander, cumin, fennel and fenugreek, constantly stir until each one is fairly dark brown. do not let them burn. Put in a blender with broken pieces of cinnamon stick and curry leaves. Blend at high speed until fine then combine chilli powder. 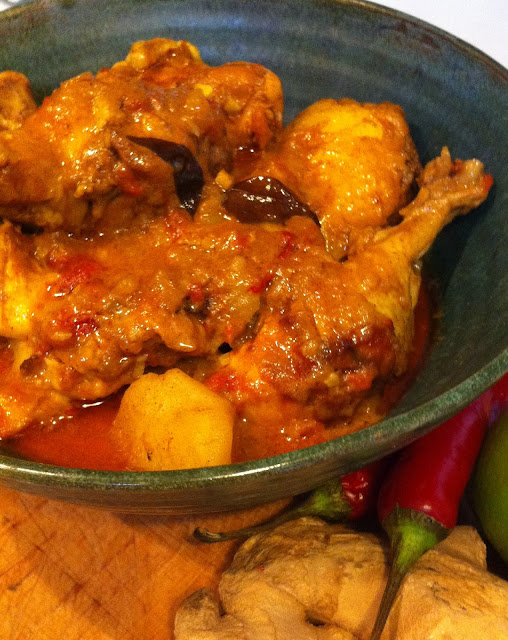 In a large pot heat up oil and fry onion until golden, add garlic, ginger, chilli, pandan leaf, curry leaves and powder, cinnamon, turmeric and cardamon. Stir and cook for about three minutes or until aromatic. Add chicken and stir well so that paste well coats all the pieces. Cook on medium heat for about 5 - 8 minutes. Add tomatoes and stir. Make sure mixture is not catching. Add potatoes and cook for about 40 minutes on a low to medium heat covered until chicken is cooked. Stir occasionally. Add coconut milk and simmer for a few minutes. Finally add salt to taste. Add lime juice just before serving